skip to main | skip to sidebar

Hi everyone! I'm a bit behind and was working on my November piece. For the first time, I was putting beads I like on the piece and adding as I go. I'm learning a lot - the hard way :-) !! -- and I have a few questions. 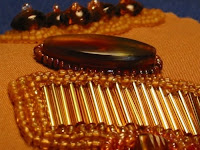 1. when I put the line of bugle beads down, they were nice and flat. Now that I've added beads around them, some of them have started popping up. What has happened? How do I avoid that?

2. in the upper right corner, I used some donut oval-shaped beads. I put them on first and then beaded around them, which was tricky! Should I bead the background circles first and then add the donut beads on top?

3. for the background circles (under the oval donut shaped beads), I started from the inside and worked my way out in a spiral -- but in doing so, some of the inside beads popped up from the surface a bit. Should I have started at the outside and worked in - or were my beads not secured well enough?


Thanks for any advice and tips! Everyone's work looks so great!

It's possible that your stitches are just too tight. You might try allowing more room outside of your donut shaped bead, your bugles and between the subsequent rows so they don't bunch up on each other. I would normally bead just as you have, from the inside out.

I'm anxious to hear how the more experienced beaders handle this!

Problem 1. I believe what has happened is that you put the seed beads too close to the bugle beads. I am somewhat new to beading & I'm still finding this as an issue, but it gets better as you realize you can leave a little more space.

Problem 2. If I was doing that, I would certainly be beading around the donuts, even though it is tricky.

Problem 3 - again, the problem would be that you are sewing the beads too close together. they need a little more breathing room.

Remember, though, that like I said, I feel I am still somewhat new to this so someone else may have a totally different opinion or suggestions.

I'm pretty new, too, and I've had the same problems. I think Grace and Cindy are right. Stitches that are too tight and beads that are too close together make some beads pop to the top.

My not-totally-scientific analysis of the situation is that each time I pull the thread taut or knot the thread, I shrink up the backing a little. Consequently, beads that seemed perfectly spaced are now too close. This is similar to the way quilting draws up the fabric.

Knowing this does nothing to prevent the crowding on my beading. Usually I can't stop myself from squeezing in that one additional bead. So for the most part, I let it be and call it texture. (I have ripped out and reapplied rows of bugles that bulged so much they bothered me.)

One thing that has helped to a certain extent with beads like the donut beads is to put them on with the stop bead on top, tie it off, and then do the same thing a second time.

I think everyone is right! It takes awhile to see how the beads set themselves and how you yourself will feel them out. I had the same questions when I started. From what I see, it's still lovely! Keep beading - you'll figure it out - it all comes with practice.

Yes, Heidi, Cindy, Marty and Grace are all on target about this. I have a couple of points to add...

1. When we try to bead solidly, so that no fabric shows, it amost always crowds the beads too much and they have nowhere to go but up.

2. In my opinion this is not a problem. I like texture and don't mind them popping up most of the time. If it bothers you, you can try couching down the popped up places, although generally that will make the beads pop up somewhere else.

3. Working in vs. working out when making circles and spirals doesn't seem to make any difference as far as crowding goes. That said, I have an easier time working outward from the center.

4. Practice allowing breathing room, letting it be OK for a small amount of fabric to show between some of the beads. The more you bead, the more you'll become intuitive about how much space to give them.

5. Your work looks lovely! I'm not just saying that to be nice... it's great!

Think of it this way, you are beading nervous. Or, you are beading in dimension! It is easy to get beads too close and too tight and some of us never get over that! Me for example, so I just go with it and tend to like the dimensions. Now, I even put felt down first and or add beads to rows already beaded for dimension! Whatever it takes is what I'm after. I don't want my work to look like everyone else's as I think each of us has an original twist to the way we handle beads and thread.

Yay! There will be a third Bead Journal Project!

For information, see here or the BJP website, here.

Here is the scoop!

We have three BJP blogs because Blogger only allows 100 authors per blog. We have 260 members, so in order for everyone to be able to post, we need 3 blogs. We hope you'll visit and comment on all three.

A step by step tutorial on how to set up your own blog can be found here.

The 2008-09 BJP, starts with September and continues through August of 09. Guidelines for participation may be found here.

To be an official member and to post to this blog, you must have registered prior to August 15, 2008.

Visit the 2008 BJP member pages, a gallery of completed work by members who have finished 8 or more pages during the first year of the project.

We have our own BJP Flickr group, where we can post pictures of our work. This is a good way for members who do not have a personal blog to post pictures. Also, you can see many BJP pieces by different members in one place. You must "join" Flickr to post your pictures.

About the Bead Journal Project

The brain child of Robin Atkins, the first Bead Journal Project, which began in June of 2007, included 241 women and 1 man who were dedicated and committed to creating 12 bead journal pages, one per month, for a year.

The BJP is all about visual journaling using any media and techniques, providing it includes some beading. We are free to structure our bead journal pages any way we want, as long as all 12 are the same size.

The current years' Bead Journal Project runs from September, 2008 through August, 2009. This blog is a means by which we may support each other in process, techniques and design. Participants (many with links to their personal blogs or websites) are listed below.

Due to limitations of Blogger, there are three ongoing blogs to document the Bead Journal Project this year. Here are links to all three blogs:

Add me to your blog!